Something happ’ed in darkest night,
change too wild to be true;
now as we gather in new dawn light,
there are footsteps in the dew.

Friday’s blood already dust,
we’ve not farewelled or blessed.
They bundled him away – needs must –
no balm, no love’s caress.

Violence ’vaded heav’n it seems,
the temple veil is torn.
But wait –
Holy reaches out, redeems.
Grace trickles from a thorn.

Something happ’ed in darkest night,
change too wild to be true;
now as we gather in new dawn light,
there are footsteps in the dew.
© Sharonne Price 2017

Accompany me with singing

If when I die, Death makes a splash,
and Love is torn but true,
Then sing the songs of a life maxed out,
given, graced, full, ever new.
Just accompany me with singing.

If when I die I’m old and frail,
and friends and Church are too,
then make the songs so light and sweet
Jordan turns from grey to blue.
Just accompany me with singing.

I have lived so long in the bleak.
Bent over
back to the whipping wind
grasping at God-shelter to grow just enough green.

There’s limestone beneath.
Ancient sea-bed now coursed with recent rains.
It flows through my toes.

God, you whisper
“Wind and water, wind and water. Hold on. Hold on”
And I do. It is grace.

This church that blows and blusters
will blast on.
And I, wizened, weary and swayed,
will yet rejoice in the green.

© Sharonne Price
January 2013,
After watching the trees on the windswept plains of the South East of South Australia

Ahmed Khatib was a 12 year old Palestinian boy who was shot by Israeli soldiers in November 2005. (Source: The Weekend Australian Magazine July 22-23 2006).

His friends say that they were playing the Palestinian version of Cowboys and Indians.
His parents donated his organs. Four of the six recipients were Israelis. Some months later all the recipients were invited to a “thank you” party. Not everyone came.

A young man, tall in stature
Is laid to rest in Gaza,
Without heart, lungs, liver and kidneys.
Life shot out.

They threw a party in El-Bqa’a
A joyful parade of heartfelt thanks
Mohammed with a new kidney,
Samah with a new heart.

This is my body, given for you.

“We don’t need to be grateful,” some said.
“After all, they’re still bombing us,
him and his crowd”
“Israelis give organs to Palestinians, too
you know”
“It was really the doctors who did the job”

Love your enemies. Forgive those who persecute you.

I am bent over in sorrow
Head and heart in hands.
We are all sick with difference
and blood soaks our common ground.

Let he who is without sin cast the first stone.

Sit and draw on the sand
ancient brothers and sisters
cry humble with me
for even the Lion stoops to drink. 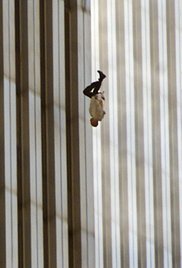 It has been speculated that The Falling Man, a famous photograph of a man dressed in white falling headfirst to his death on September 11, was an image of an employee at Windows on the World . Although his identity has never been conclusively established, he was believed to be Jonathan Briley, an audio technician at the restaurant. Commentary at the time asked the obscene question, “Can someone who takes their own life in those circumstances be assured of grace?”

That September morning
from Windows on the World
he fell.

Stepped, flung himself
into a roaring, tearing wind,
then still.

A step, a choice,
from final conflagration,
that hell.

Sweet clarity
to know that no-one falls
from grace.

A flagrant act
to fly with heaven
in terror’s face.

Stately old lady, God’s church.
She lumbers her way,
Limbs weary with pains from the old abuses
and loaded with all the good
she can’t do anymore.

Stubborn old lady, God’s church,
waiting with Havisham
for a missing groom,
while the cobwebs grow heavy
and unfed guests drift back into the night.

Lonely old lady, God’s church.
She still hopes they’ll come
like dutiful children to sip and to swallow
whilst in polite conversation
about …well…you know… .

But deep down she knows the meaning of things.
She’ll muster the strength of the past,
to watch for the flames
that flicker and grow in new hearths
and embers that fire newborn hearts.

Then she too will arise, a barefoot bride,
and skip off with her groom ’cross the moors,
soft silky veil adrift in the wind.
She’ll wade into waves on new shores
and turning, throw her bouquet to old bridesmaids –
friends left behind.

They’ve brought guns into St Pat’s, for
Nuns must be safe
as they share the holy elements.

Lord, in your living, you restore our life.
Grant us your peace. Amen

I watched that Monarch
and could not say –
Was she wrestling her way out
of the cracking chrysalis,
or writhing her way in?

Such inexorable effort,
innate, not chosen.
Not brave, not heroic,
just obedient to life.

No swaddling ever held so tight.
The miracle of wings. Delight.

And those of us who’ve seen this a thousand times
still wring our hands
and say “God is gone. The church is doomed”.

We’ve forgotten Easter news,
left it sleeping in the pews.

As if that ever made a butterfly.

No, this great orb will trundle through,
defy the void beyond the blue.
She’ll tread her path both grand and narrow
and spin her way through light and shadow.

This is sweet gift and paradise
that you and I, despite demise,
leave legacies beyond the sorrow
that turn and twirl and power tomorrow.

Tis your season for withholding, Lord,
and mine for golden pallor,
I steady myself for the letting go,
and relinquish foolish valour.

The wind blows hard, the sap draws down
You’ve taken summer’s sheath.
They’ll see the bony fingers soon,
and all that grew beneath.

I railed against the verdict, then.
Prognosis, promise, threat.
And prayed and played against the odds
for still more life, and yet…

’Tis your season for withholding Lord,
I’ll float to mother earth,
and sink in deep on forest floor,
sweet tryst with ancient birth.